Xanax and Alcohol – Not to be Mixed

Combining Xanax and Alcohol is among the most harmful drug combinations for the body and brain. Each substance increases the effects of the other, intensifying the associated dangers. Even a normal-sized, legally prescribed dose of Xanax should never be combined with alcohol. Despite being a highly risky combination, alcohol is the most common substance abused alongside Xanax.

Effects of Alcohol on the Body

Of the four types of alcohol that exist, the one we consume is called ethanol. If consumed, any of the three other types of alcohol, (propyl, methyl & butyl), would most likely kill you right away. Abusing ethanol alcohol can also kill you; it just takes much longer. Ethanol comes from the fermentation (chemical breakdown) of yeast, sugar, or starch. Once consumed as an alcoholic beverage, the ethanol is distributed into the bloodstream, increasing blood alcohol content (BAC), and resulting in intoxication; the higher the BAC, the more severe the intoxication.

Before discussing what physical damage alcohol can do in the short term, it is important to note that even one episode of heavy drinking can cost you your life. While a BAC of 0.08% is legal intoxication and impairs your abilities, a BAC of 0.20% can cause a blackout, which could lead to an accident or risky behavior, and a BAC between 0.3% and 0.35% could cause a coma or even death. Being under surgical anesthesia is equivalent to a BAC of 0.35% and is in a controlled environment. Reaching a BAC that high is equally as deadly for a first-time drinker as for an alcoholic.

The short-term effects of alcohol abuse begin with what are desirable effects for drinkers: euphoria, mild sedation, and reduced inhibitions. These are the feelings associated with what is known as ‘social lubrication.’ Having two or three servings of alcoholic beverages may induce these feelings, and when done with moderation, is relatively harmless. The short-term effects of alcohol become progressively worse, however, and start to become dangerous and less desirable. (Bear in mind as you read on that reduced inhibition in and of itself can lead to risky decisions and/or behavior). 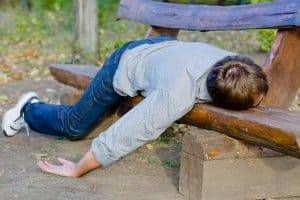 The more dangerous/less desirable short-term effects of alcohol include slurred speech, drowsiness, emotional instability, disrupted sleep, lowered body temperature, and in excessive cases can include nausea, vomiting, loss of control over the excretory system, a blackout, a coma, and even death. Other short-term side effects caused by alcohol abuse include blacking out, getting a hangover, weight gain, high blood pressure and reduced sexual performance.
Blacking out is more serious than you may think. Black outs are literally temporary memory lapses caused by impairment to the brain. It may seem funny to a partier to not remember pieces of the night before, but in reality that person is giving his or herself brain damage slowly.

Alcohol poisoning is perhaps the most severe short-term side effect of excessive drinking. This occurs when the drinker moves from a state of stupor to a state of dangers intoxication. Someone poisoned by alcohol will not be able to help themselves and will be incoherently drunk. Signs of alcohol poisoning include extreme confusion, complete loss of coordination, intense vomiting, seizures, irregular/slow respiration, blue or paler-than-normal skin, hypothermia and comatose-like unconsciousness. Alcohol poisoning can be fatal. On average, six Americans die per day from alcohol poisoning.

The long-term effects of alcohol are much more dangerous and can last a lifetime. We will focus on the physical effects, since the main focus at hand is Xanax and Alcohol abused in combination. However, it is prudent to mention some of the outlying long-term effects of alcohol abuse. These include (possible) car accidents, injuries, assault, violence, loss of productivity, issues at work and/or at home, and relationship troubles. Dependence on alcohol also puts a financial strain on the alcoholic and his or her family.

The physical long-term effects are no prettier. Over time, alcohol abuse can severely damage multiple parts/areas of the body. Liver damage is common among alcoholics, as fatty liver disease, alcoholic hepatitis and cirrhosis are possible liver-related outcomes. Fatty liver disease occurs when excessive drinking leads to extra fat in the liver, causing it to become inflamed and function improperly. Alcoholic hepatitis is caused by drinking excessively with an already-inflamed liver, possibly from fatty liver disease. The worst liver-related symptom caused by alcohol abuse is cirrhosis, which is damage to the actual liver cells, possibly leading to liver cancer or even death.

The brain too suffers greatly from long-term alcohol abuse. Aside from damage caused by blackouts, brain damage from lack of Vitamin B can occur, as well as Wernicke’s encephalopathy and Korsakoff’s psychosis. Wernicke’s is eye muscle paralysis and Korsakoff’s is a combination of amnesia and permanently impaired coordination. Oftentimes, alcoholics develop both diseases simultaneously, known as having Wernicke-Korsakoff Syndrome.

See Our List of the Best Alcohol Treatment Centers

Effects of Xanax on the Body

Anxiolytics are a class of drugs that exhibit both anti-anxiety and tranquilizing properties. These drugs are used to treat panic disorders and anxiety disorders. Xanax is likely the most common anxiolytic on the market. Anxiolytics are considered benzodiazepines, which are a group of drugs that sedate, induce sleep, prevent convulsions and relax muscles.

Like others in its class, Xanax can exhibit sedative, sleep-inducing and muscle-relaxing properties. Because of these effects, Xanax is also a commonly abused recreational drug. In fact, from 2003 to 2012, admissions to treatment facilities for Xanax increased tenfold. For every person admitted for Xanax in 2003 there were ten who were admitted less than a decade later.

Xanax works by slowing down activity in regions of the brain associated with anxiety, fear and agitation. It attaches to receptors in the brain associated with such feelings and polarizes the according brain cells. A quarter of a milligram (0.25 mg) to a half of one (0.5 mg) is the recommended dose of Xanax for someone to whom it is prescribed. Often Xanax comes in 1 mg tabs with perforations. These tabs have come to be called “Zanny bars” in the drug-abuse world.  Too many of these can result in catastrophic damage.

Similarly to with alcohol, the initial effects of Xanax can be desirable to a non-prescribed abuser. These include euphoria, sedation, extreme relaxation and lack of worry. However, because of the complex chemical makeup of such drugs, Xanax does not produce the same results in all people. It can also cause nausea, stomach-bleeding, double vision, temporary amnesia, lack of focus, and muscle tremors in the short-term.

As with all prescription drugs, Xanax can produce side effects that may occur even for those taking it as prescribed. These include headache, fatigue, dizziness, dry mouth, seizures, depression, lack of sex drive, difficulty urinating, constipation, rashes, shortness of breath, and mood changes.

Over time, the abuse of Xanax can cause serious damage. One major long-term effect is the overproduction of enzymes in the liver. Xanax can cause abnormal amounts of liver enzymes, which are proteins used by cells. This can permanently damage the liver.

Many more forms of long-term damage are caused from the body becoming used to the effects of Xanax. The body of a Xanax abuser adapts over time to the effects of the drug. His or her brain adjusts accordingly, and so if and when intake of Xanax is halted, the results are harsh. The effects of Xanax Withdrawal can mean difficulty thinking clearly, very poor memory, mood swings and impotence.

Continued use of Xanax over many years, for longtime addicts, can cause dementia, amnesia, respiratory depression, delirium, severe depression, violence, and even psychosis. Not fun.

Xanax and Alcohol when combined

The additive effect is when two or more drugs are combined and produce a new, stronger effect. Most times, the additive effect can increase the potency of each drug involved. Consider now this quote from Elements Behavioral Health: “Particularly harmful is pairing the anti-anxiety drug Xanax with alcohol. Like alcohol, it acts on the hypothalamus in the brain and slows breathing, heart rate, body temperature and blood pressure. The additive effect of using both Xanax and alcohol can slow these necessary bodily functions to a dangerous degree.”

Both Xanax and Alcohol are considered to be central nervous system (CNS) depressants. Therefore, when combined, the additive effect depresses the CNS greatly, which can cause respiratory depression. This is common among those who mix Alcohol and Xanax regularly. It causes breathing to become so inadequate that not enough carbon dioxide is released, possibly leading to further complication. The possibility of respiratory arrest exists for combined alcohol & Xanax abuse, which can be fatal within minutes of starting. 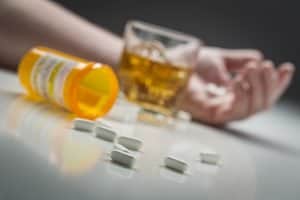 Not that the side effects of Alcohol and Xanax on their own aren’t bad, but a list of potential side effects from combining Xanax and Alcohol is worse. The side-effects from an Alcohol combo (not previously listed) are anoxic brain damage, liver cancer, cardiomyopathy, arrhythmia, stroke, mouth/throat cancer, breast cancer, and pancreatitis. The effects are worse due to the additive effect.

The last major effect combing these drugs can have regards sedation. Because both Alcohol and Xanax exhibit sedative properties, there is an increased risk of excessive sedation. This can lead to a coma.

Statistics Say it All

Xanax is the second most prescribed psychoactive drug, behind hydrocodone. This inevitably makes it one of the most widely prescribed drugs. Xanax and Valium are the two most commonly abused benzodiazepines. According to the Substance Abuse and Mental Health Services Administration, 95% of people admitted into benzodiazepine treatment also suffer from a secondary substance addiction. Since alcohol is the single most commonly abused substance, logic says a good portion of these patients suffer a dual diagnosis of Xanax and alcohol addiction.

Here are more startling statistics regarding the combined abuse of Xanax and Alcohol:

People drink for hundreds of reasons, but people are prescribed Xanax for two reasons: panic and/or anxiety disorders. Sometimes alcohol may be used by those prescribed Xanax to further mask the pain associated with panic and anxiety. Sometimes alcoholics feel anxious or panicky and take Xanax to combat these feelings. Addiction creates many difficult obstacles to overcome. However, you should now be more aware of just how dangerous the combination of Xanax and Alcohol can be.

If you abuse Alcohol and Xanax simultaneously with any regularity, it is not recommended to stop cold turkey. As stated, the body may react in an adverse way, leading to health complications. Seek help from a medical professional or call 888-611-2412 to speak to an addiction treatment specialist and get help today.