What is Alcoholic Hepatitis? 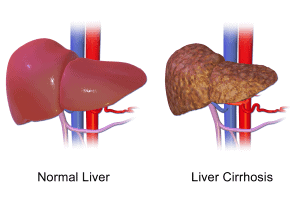 Alcoholic hepatitis is a diseased, inflammatory condition of the liver caused by excessive alcohol consumption over an extended period of time. If you develop this condition, you must stop drinking alcohol. Continued drinking can lead to additional health problems, such as cirrhosis (permanent scarring) of the liver, or even liver failure.

Because alcoholic hepatitis doesn’t occur in all heavy drinkers, other factors may influence the development of this condition. These include:

Effects of Alcohol on the Liver

Drinking too much alcohol initially causes fat to build up in the liver – a potentially reversible condition. But alcoholic hepatitis – caused by inflammation of the liver due to severe, alcohol-related liver disease – is linked to liver failure and in up to 30 percent of cases it kills patients within a month.

Women are at a greater risk (twice as likely as men) of developing alcoholic hepatitis. This may be due to the differences in how the male and female bodies absorb and break down alcohol. 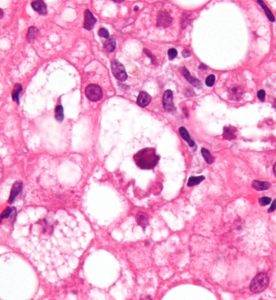 In the stage of acute alcoholic hepatitis, there may be nausea, loss of appetite, gradual loss of weight, jaundice and other symptoms of liver dysfunction (prolonged prothrombin time, hypoalbuminemia, ascites, and hepatic encephalopathy). Prothrombin is a protein present in blood plasma that is converted into active thrombin during coagulation. Hypoalbuminemia is a medical condition where levels of albumin in blood serum are abnormally low. It is a specific form of hypoproteinemia. Acites is the accumulation of fluid in the peritoneal cavity, causing abdominal swelling. Hepatic encephalopathy is the loss of brain function that occurs when the liver is unable to remove toxins from the blood.

In a trial involving more than 1,000 patients, the generic medicines – prednisolone and pentoxifylline – were found to make no significant reduction in death rates over 28 days, over 90 days or even over a year.

This study – involving 1,053 patients being treated at 65 hospitals across Britain – was four times larger than any previous trial in patients with severe alcoholic hepatitis, so gives a clearer picture of how effective the drugs are.

Overall, 16 percent of patients died within 28 days of starting treatment. At 90 days, 29 percent of patients had died, and after a year, 56 percent had either died or had a liver transplant. There were no statistically significant differences in death rates between the groups.

Researchers were surprised to find neither treatment had a significant effect on survival after the first month, and the mortality rate after one year was alarmingly high.

One reason why the drugs might not improve survival rates was that they increase the risk of infection.

In most patients with alcoholic hepatitis, the illness is mild. The short-term prognosis is good, and no specific treatment is required. Hospitalization is not always necessary. Alcohol use must be stopped, and care should be taken to ensure good nutrition; providing supplemental vitamins and minerals, including folate and thiamine, is reasonable. Patients who are coagulopathic should receive vitamin K parenterally. Anticipate symptoms of alcohol withdrawal, and manage them appropriately.

Alcoholic hepatitis is a serious disease with significant short-term mortality. Treatment options are limited but include abstinence from alcohol, supplemental nutrition, and, for select patients, pentoxifylline or corticosteroids. Because most transplant centers require six months of abstinence, these patients usually are not eligible for urgent liver transplantation.