PTSD & Alcohol Abuse in US Veterans

It’s widely understood that many members of the military become afflicted with PTSD, posttraumatic stress disorder. This condition develops due to some sort of life-threatening event, such as warfare, assault, major accidents, or unwanted sexual encounters, among other traumatic events. Some sort of ‘trigger’ in everyday life will cause someone with PTSD to react as though he or she were back in the time of the traumatic event. 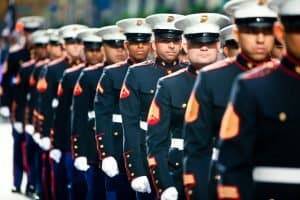 PTSD is relatively uncommon, and obviously does not occur after each and every life-threatening event. However, for military members, the condition is feared and has been for quite some time. According to the Dept. of Veterans Affairs, 75% of those who have survived a violent traumatic episode report alcohol abuse problems. Because militant situations are a leading cause of PTSD, this suffices to say that a military member with PTSD has all-too-good of a chance of abusing alcohol.

Now, it’s stereotypical to say that those in the military drink lots of alcohol. Unfortunately, this stereotype is rooted in some truth. Up to 20% of all veterans are frequent heavy drinkers, as explained in a journal entry by the National Institute on Alcohol Abuse and Alcoholism. The same report shows military members to be 3.5 times more likely to engage in alcohol abuse than citizens.

Among US veterans with PTSD, alcoholism is a rampant disease, and vice-versa:

The desired effects of alcohol may help cope with PTSD symptoms. Because alcohol makes one much less aware, triggers of PTSD may be relinquished. Aside from the numbing effects of alcohol, a traumatic event is known to spike endorphin levels as a natural defense. In turn, this creates a feeling of withdrawal after the shock of the event wears off. Many turn to alcohol to satisfy this withdrawal.

Alcohol exacerbates PTSD, however, it also makes its symptoms even worse. Alcohol is a depressant, and it causes feelings of anger, irritability, and defensiveness. These factors significantly tie in with PTSD symptoms of lashing out and/or reacting adversely to a trigger. The emotional distress, pain, anxiety, and depression associated with PTSD are flared by alcohol abuse, which can make one exhibit the same qualities.

Because both alcoholism and PTSD are separate disorders, having both incurs the need for a dual diagnosis. First, the life-threateningly traumatic event occurs, whatever it may be. Next, the victim experiences terrifying memories, nightmares, and/or flashbacks. Then, the victim develops PTSD, and after that turns to alcohol to self-medicate. Finally, the victim becomes dually diagnosed with alcoholism and PTSD.

This timeline is a sadly accurate path many veterans take. A major reason many veterans do not seek help is guilt or shame. However, as reported by Science Daily, there is now more reason than ever for veterans with substance abuse disorders and/or PTSD to sober up.

Science Daily based their article on a study, published in the journal Addiction, which involved almost 4.5 million veterans. This was one of the largest studies ever performed of its kind.

Throw PTSD or another mental condition into the mix, and things can get even uglier.

As written in Science Daily, “…the new findings point to a need to focus more veteran suicide-prevention efforts on those who have substance use disorders, especially if they also have depression, schizophrenia, bipolar disorder, posttraumatic stress disorder or anxiety.”

Now, to quote a study published in the Journal of Nervous and Mental Disease: “PTSD was significantly associated with suicidal ideation and suicide attempts. None of the other anxiety disorders [lifetime social phobia, panic disorder, agoraphobia, generalized anxiety disorder, or simple phobia] were significantly associated with suicidal ideation or attempts.”

An alcoholic veteran of the United States, who has seen warfare and therefore developed PTSD, is highly more likely to commit suicide than a sober citizen.

Please know that if you or a loved one is affected by posttraumatic stress disorder, alcoholism, thoughts of suicide, or any combination of these, please seek help immediately. There is no shame, no guilt, and nothing bad about reaching out. Help is available.