It’s a well-established fact that Alcoholics Anonymous (AA), and many other twelve-step programs based on AA, are successful. Otherwise, there wouldn’t be over 2 million AA members worldwide. Joining is free and as simple as showing up. It’s a wonderful program for recovering alcoholics, and it’s a brilliant option for those with limited resources, unable to enter into a professional treatment program or receive professional aftercare. However, AA and similar groups are not treatment programs. They are meetings that encourage long-term sobriety using open conversation and the famous twelve steps.

So is AA truly an effective method of staying sober? Members would obviously say yes, and this is something known as self-selection bias. AA works for people who join because they were motivated to join. Nobody forces membership – it is entirely voluntary. The effectiveness of AA cannot be measured for those who are not in AA.

Here’s a simpler way to describe self-selection bias… Say 100 students are going to take an exam a week from now. The day before the exam, there is a study course, which half of the students take. Exam scores are significantly higher for those who took the course, but that does not necessarily mean the study course was effective. Motivation, status, studiousness, prior exam-taking experience, and many more factors caused that half of the students to take the study course. The study course’s effectiveness can only be measured if all 100 students take it and then test scores are compared from before and after.

So what if self-selection bias were to be removed from the equation? What if there was a way to determine the effectiveness of AA overall, not just for those who self-selected themselves into the group? A study published recently by UK-based Drug and Alcohol Findings (DAF) found a way.

Although AA is not an official treatment program, joining is often recommended as a part of aftercare for patients in such programs. In fact, there are professional interventions held nationwide that promote and encourage AA membership. Sometimes patients in treatment are referred to these interventions as parts of voluntary trials.

According to Drug and Alcohol Findings, these referrals may be increasing the perceived effectiveness of AA. From the study: “The case for AA truly being effective in helping to control dependent drinking received a major boost when trials which randomly allocated patients to professional interventions to facilitate and promote AA attendance found these improved outcomes.” Self-selection bias cannot be ruled out from these studies’ results, “…because they test the effectiveness of AA facilitation interventions, not AA as such.”

The DAF study removed the self-selection bias from these trials in order to determine the true effectiveness of AA. The research team selected six separate trials to analyze, using a database of trials which placed patients in AA-promoting interventions. A total of 2,356 patients were included overall.

Once after three months, and again after fifteen months, total AA attendance from these six trials was split up and analyzed according to the method described above. Once the team isolated the portion of members who were at the AA meeting(s) only because of the intervention, a “natural attendance rate” was found. Measuring the drinking outcomes of this ‘natural’ group allowed the team to make “a relatively ‘pure’ estimate of the impact of attending AA, stripped of selection bias.”

The boiled-down reason for this study was to determine if AA really works or if AA is merely a group of “drinkers who are more motivated to change, less troubled, or more socially stable, who would in any event have done better.” It turns out that regardless of self-selection bias, AA is effective for maintaining abstinence, and can be effective as a part of professional substance abuse treatment.

However, AA is not recommended as the sole method for treating alcohol dependence. There can be a fine line between someone who AA works for and someone who would require professional substance abuse treatment and/or aftercare. That being said, attending Alcoholics Anonymous can do no harm, and absolutely helps maintain sobriety, yet professional treatment is always strongly recommended for those with an addiction.

After finding the ‘natural’ group and analyzing, the research team discovered “…a statistically significant relationship between greater AA attendance and more days of abstinence.” In all trials except for the MATCH aftercare section, AA meeting attendance rose by 12% at the three-month mark, and was still up by 10% at the fifteen-month mark. At the three-month mark, attending an average of two meetings per week provided an extra 3.3 days of abstinence per month. At the fifteen-month mark, the relationship between AA attendance and abstinence “…became slightly stronger.” An exact number is not given, but 3.5 days is a safe assumption.

Regarding the MATCH aftercare section, attendance did increase by 12% but the team found no significant increases in abstinence among these participants, even after fifteen months. The reason for this is simple, and best explained by the team itself:

“Here the AA-promoting intervention did stimulate greater attendance, but that was not associated with any significant increase in days of abstinence. The likely explanation is a ‘ceiling effect’: in the other trials the interventions shifted attendance from zero or infrequent to steady, more of a step change than the frequent to yet more frequent shift in the Project MATCH aftercare trial.”

This is because these participants were familiar with AA-promotion, some already members.

AA meetings are usually no longer than two hours long. That means 4 hours of attendance translates to 80 extra hours of sobriety, every month. Stick with it, and the sober hours increase. The research team concluded that even accounting for self-selection bias, “AA appears actually to benefit people with drinking problems rather than simply acting as a gathering place for individuals who would have improved without it.”

In America, where you are most likely reading this, AA is an integral part of our society. Nearly everyone at least knows what it is. Remember though this study was performed in the UK. Commissioners there are interested in finding a way to transition those in treatment to AA or similar groups, without increasing the relapse rate. This would be a way to conserve the resources used in professional treatment.

However, many in the UK are skeptical of the effectiveness of AA and other similar groups. A “lack of rigorous studies” on the effectiveness of AA is, according to the DAF research team, a major reason for this skepticism. “Nearly all the research on 12-step groups and allied treatments comes from the USA, but the US record – where the 12 steps are deeply engrained and widely accepted – is not necessarily a guide to their impact in other societies,” the team goes on to say.

In the UK, the current research-based belief is that 12-step programs do not significantly increase abstinence, but that interventions promoting 12-step programs do help increase abstinence. The conclusion here? “Maximum impact can be expected among patients not already committed to the groups, but who would try them if encouraged to do so by their counsellors or clinicians.”

The DAF study showed that AA meeting attendance does promote abstinence. However, the research team acknowledges that it may be the promotional interventions that actually cause increases in abstinence.

In order for 12-step program attendance to become a regular part of alcohol dependence treatment, the distinction must be made. In a US study similar to the DAF study, conducted in 1998, it was shown that “…patients who went on to attend AA in the three months after leaving the inpatient centre were almost four times more likely to have remained abstinent. Though it remained, at 1.7 times more likely to be abstinent, the effect was halved and became statistically insignificant when adjusted for self-selection.”

Sometimes you just have to go with the flow. If it’s becoming evident that promoting AA is more effective than self-chosen AA attendance or attendance as part of treatment, then why not make AA promotion a permanent part of treatment? “Treatment services will perhaps be less interested in whether AA attendance promotes abstinence, than in whether intervening to encourage patients to attend AA will lead to more of what patient and service are trying to achieve,” says the DAF research team.

Take one last study to show where we stand as far as incorporating AA with treatment:

Incorporating twelve-step programs into treatment may work for more than just alcohol abuse.

A 2014 study published originally in Alcoholism: Clinical and Experimental Research and republished by Drug & Alcohol Findings showed that while in treatment, peer encouragement to attend AA was stronger than either doctor recommendation or being given a meeting schedule and literature on the program. A total of 151 patients were included, 57% of whom were strictly alcohol-dependent, but another 38% of whom were also opioid-dependent. Take a look at the following chart: 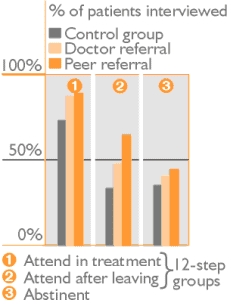 Patients in the control group received “…a list of the 12-step meetings to be held on the ward, and just before they left the unit they were also given a list of meetings in their home areas and offered 12-step literature.” Patients in the doctor referral group “…saw a doctor trained by the researchers to systematically encourage 12-step group attendance.” Finally, patients in the peer referral group “…were offered a similar discussion, but this time with an active member of a 12-step mutual aid group.” This active member is what the researchers considered to be a peer.

The difference in abstinence between the control group and the peer referral group is, on average, only eight percent. However, the study showed how incorporating twelve-step programs such as AA can only help, not hurt. Also, this and all the other previously mentioned studies together show that AA attendance is not a reflection of AA effectiveness.

One cannot replace treatment and/or professional care with Alcoholics Anonymous. Still, the bottom line, as with all decisions regarding substance abuse treatment, is that the choice is yours. If you believe AA meetings will benefit you during or after your treatment, then go. Evidence suggests an increase of at least 3.3 days of sobriety after only eight meetings. This is nothing to shrug off. Every day counts. As one of the main mottos of AA goes, One Step at a Time!!!