Blacking Out: The Long Term Effects

A blackout caused by alcohol is defined as “amnesia for the events of any part of a drinking episode without loss of consciousness.” Blacking out is not the same as passing out, because those who black out are still able to engage in activities, including “driving for long distances or carrying on normal conversations…” However, what people do when blacked out gets much more sinister. Consider Billy Davis, who killed three people when blackout drunk. Even worse, being blackout drunk has been used as a defense for murder, in the case of Higinio Salgado. (He was sentenced to fifteen years in jail.)

When blacked out, you continue to function as a human, but your decisions and behaviors are still severely affected by the alcohol. According to Dr. Aaron White of the National Institute of Alcohol Abuse and Alcoholism (NIAAA), “It can be quite difficult for an outside observer to tell if someone is in a blackout. The person could seem aware and articulate, but without any memory being recorded.”

Blackouts occur in two forms, fragmentary & en bloc.  Fragmentary blackouts cause the loss of a short amount of time, and en bloc blackouts cause the loss of much time, perhaps even an entire night.  Both types narrow down to the same damage. Your hippocampus is being altered greatly enough to stop the formation of memories, and you are actually experiencing transient amnesia. While a blackout is not a lasting form of amnesia, severe alcohol abuse can indeed lead to full-blown amnesia, as will be discussed.

Therefore, not only are blackouts damaging to the brain and body, they can also cause someone to engage in risky behavior and not even remember it. We all have either done something drunk and not remembered or know someone who has. Now that we know what blackouts are, let’s explore what blackouts do to the brain, what they do to memory, and just how dangerous blackouts really are.

There are three forms of memory. We have the sensory memory, which lasts a few seconds, the short-term memory, which lasts a handful of minutes, and the long-term memory, also known as storage, which can last forever.  Alcohol deteriorates each form of memory differently.  From “blacking out” to developing full-blown amnesia, alcohol poses serious risks to the brain, and memory damage is not excluded.  The hippocampus is the part of the brain responsible for new memory formation, and alcohol “distorts the activity of neurons in the hippocampus.”  So that time you thought it was funny you blacked out at a party, it wasn’t, because seriously damaging things happened to your brain.

Over half of college students have blacked out drinking at some point, and at the time of a 2004 study by the NIAAA, 40% of college students had blacked out drinking in the last year.  This represents those who actually cannot recall a period of time drunk, not just those binge drinking (which is a whole other epidemic).  Almost 10% of those surveyed reported having blacked out in the last two weeks.  Among the activities those who blacked out later learned they had engaged in: driving, unprotected (and in some cases nonconsensual) sex, vandalism, and injury.

In an article for the NIAAA, Dr. White explains why we lose our memory when blacked out, and also how alcohol impairs the ability to make new memories in the future.

“Alcohol primarily disrupts the ability to form new long–term memories,” says Dr. White. “As the amount of alcohol consumed increases, so does the magnitude of the memory impairments. Large quantities of alcohol, particularly if consumed rapidly, can produce a blackout, an interval of time for which the intoxicated person cannot recall key details of events, or even entire events.” The more you drink, the less you’ll remember, and not just from the night before, but overall.

Evidence suggests the hippocampus is not the only part of the brain responsible for memory that is damaged by alcohol. The frontal lobes of the brain are responsible for attention, memory, and other ‘executive performances.’ Alcohol has been shown to damage the frontal lobes, causing executive dysfunction. Those afflicted “may not be able to anticipate and plan for the future, making the associated decisions,” said Ester M. Nakamura-Palacios, senior scientist at the University of Espírito Santo. “They may be unable to solve problems, even simple ones, and have difficulties focusing their attention or concentrating on something,” and at worst, may have difficulties controlling their own behavior, losing the ability to inhibit inadequate or even injurious behaviors.”

Other Dangers of Blacking Out

An alcohol-induced blackout is considered an alcohol overdose, and can be fatal. Overdoses have a wide range of severity, but even the least severe symptoms can cause major problems. On the worse end of alcohol overdose is alcohol poisoning. “Alcohol poisoning occurs when there is so much alcohol in the bloodstream that areas of the brain controlling basic life-support functions—such as breathing, heart rate, and temperature control—begin to shut down,” according to the NIAAA.

Symptoms of alcohol poisoning include, but are not limited to:

Even the slightest amount of drinking can cause at least temporary damage. As your blood alcohol content (BAC) increases, so does the potential for harm. Take a look at this chart published by the NIAAA: 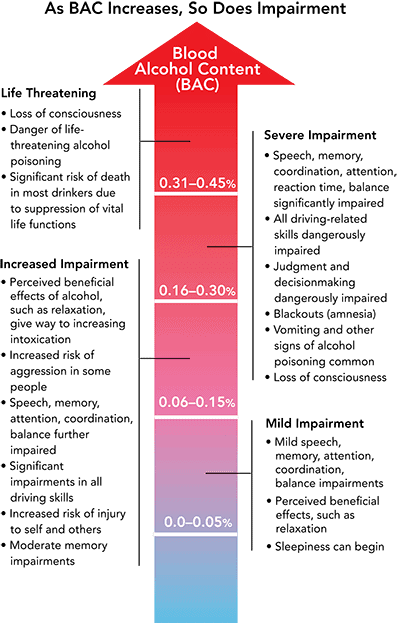 The Blackout could be Permanent

Wernicke-Korsakoff Syndrome (WKS) is a memory-impairing, vision-affecting, seizure-causing disorder, most commonly brought on by severe alcohol abuse.  The two main required symptoms for diagnosis are both forms of amnesia: anterograde amnesia, which causes loss of the ability to create memories, and retrograde amnesia, which causes loss of previously-formed memories.  In short, severe alcohol abuse can cause you to lose memories and to stop making them altogether.  That would surely be a burdened life.

You could drink one time on your life and black out. You could be a problem drinker and black out more often. You could be an alcoholic who blacks out every day. The bottom line is that alcohol abuse will deteriorate your brain’s ability to create and store memories, and the more you drink, the more likely this is to happen. WKS is a multi-symptom form of amnesia, and up to 2% of the population is afflicted. This may seem low, but 2% of America is almost six and a half million people.

Anyone who drinks alcohol to excess is at risk for blacking out. You do not have to be an alcoholic to black out. However, some factors make people more likely to black out than others. These include but aren’t limited to:

Prevent blacking out by drinking responsibly, if you so choose to drink. According to the National Library of Medicine: “In order to prevent alcohol-induced blackouts, the following is recommended: drink alcohol slowly, drink modestly, drink infrequently, drink with side dishes, and abstinence or moderation in drinking is especially important in high-risk groups, that is, persons with a large number of alcoholic relatives.”

It can happen to anyone, and it happens all too often.  Don’t compromise the livelihood of yourself or others by drinking to that point.  It isn’t worth it. Seek help today if necessary.